An article titled Design and requirements? Pshaw! was published recently on Bridging The Gap. It discusses whether or not it is good practice to include ‘designs’ within a requirements document. I’ve seen this debate before, in various guises, and I’m always a little bemused and confused by it. And here’s the reason:

Now that’s going to take a little explaining, so bear with me.

Let’s start with a definition. According to Philippe Kruchten (in The Rational Unified Process, An Introduction):

“A requirement is a condition or capability to which a system must conform.”

BABOK® has a similar, albeit more rigorous, definition. Requirements, in what I think of as their ‘raw’ form, generally take the form of ‘the system shall…’, as in:

These are the sorts of statements you tend to get from stakeholders when you sit them down and interview them. Well, actually that’s a simplification. Usually the conversation goes something like this:

At the end of this conversation, our analyst might write up the output of the exercise as a set of ‘the system shall…’ statements, and then maybe give each one a unique number for traceability. He would then report to his project manager that he has elicited the requirements for (some part of) the system.

He might then spend some time filling in some of the gaps, like exactly what an address looks like, and then tells his PM that he has elaborated or analysed the requirements.

Then he might show his elaborated requirements to the developers. These guys are smart, and therefore will invariably ask a number of awkward questions about things the analyst hasn’t thought of, usually starting with, “now what happens if…”, as in:

Following this, our analyst spends some time updating the document and reports back to the PM that he has clarified the requirements.

So, in the analyst’s own language, he has elicited, elaborated and clarified the system requirements.

I would like to suggest that, in reality, what he has done is designed the system.

Just to be clear, I’m talking here about functional design, as opposed to technical design – the design of the user-visible aspects of the system, not its internal workings. But it is design nevertheless. What personal details to capture; what order to capture them in; what an address looks like; whether to have a button or a hyperlink. These are all design decisions – some made collaboratively (with a stakeholder or a developer); others made alone.

Now you might just say it’s merely a matter of terminology – requirements analysis versus functional design. But I think there’s more to it than that. I think there is also a difference in mindset, which manifests itself as follows: 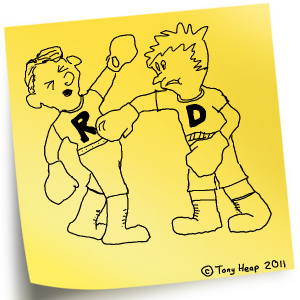 Requirements versus design – whose side are you on?

You could argue that there are some aspects of requirements capture that are not design. That very first meeting with the stakeholder, where they tell you their raw, unprocessed needs for the project – before you’ve had the chance to work them through. But if that’s all you’re going to capture – then you’re not a BA, you’re a scribe. As soon as you start probing, questioning, making the stakeholder think a little more about what they want – then you’re designing. And in any case, those ‘raw, unprocessed requirements’ are likely the result of a (sometimes subconscious) design process that the stakeholder has already gone through before even talking to you.

Here’s another way of looking at it. All business change tends to start from the statement of either a problem or an opportunity. So for example, your stakeholder might say, “Our call centre costs are too high – and by the way, most people are calling us to have their password reset.” They are stating a business problem. Now, as soon as they say, “I require customers to be able to reset their own passwords online,” they are designing a solution to that business problem. And if your stakeholder says, “We’re missing a trick here, we should be selling these books online, not just by post – what I need is an e-commerce solution,” then he’s stating a business opportunity, and he is already designing it.

As you can probably tell, I’m strongly in favour of the functional designer mindset. It encourages me to take responsibility for all user-visible aspects of the system, not just those that I (arbitrarily) classify as requirements.

Other issues I have seen with the requirements analyst mindset include:

I do think the mindset is shifting though. Use cases are a big help. I’m a big fan of use cases – their structure and language make it very clear that they are describing a design: “The user does X; the system does Y” etc. Also, check out these links:

And yet I still hear BAs say: “Well, I’ve captured the requirements – as use cases – but I’m not doing the wire frames – that’s design!”

61 thoughts on “Requirements Versus Design: It’s All Design”