This is a story about how my relationship with a “difficult person” was improved considerably and unexpectedly by a very simple change.

A while ago I was working on a project. Things were going well. Elaboration was proceeding nicely, and I had a good relationship with my stakeholders. In order to ensure close working with the stakeholders I had found myself a desk in their area so I could immerse myself in their business area. 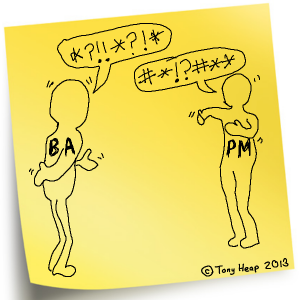 A Typical Discussion with my Project Manager

There was just one problem: my project manager. We just weren’t getting on. He’d only recently joined the project and I didn’t rate him that highly. He didn’t seem to be doing the things I expected him to do – like creating a plan, chasing me for deliverables, managing risks and issues – you know the sorts of things PMs like to do. Conversely, he did seem to be doing the sorts of things I was supposed to be doing – like understanding the business problem and finding an appropriate solution. In project meetings he would be constantly coming up with solution ideas, often seemingly quite random ones to me, based on his previous experience, but not really relating to the current project. After a while he started driving me up the wall.

I have to say I don’t suffer fools gladly – I’m not especially tolerant if I don’t think someone’s pulling their weight or playing their proper part. It all came to a head in a meeting one day involving me, said project manager, our senior manager and a number of senior stakeholders. I was explaining some of the key design options and the PM chipped in with a massive and random curveball idea which was something we hadn’t discussed before and completely threw me. One of the stakeholders latched on to it and the whole meeting slewed in a direction I really hadn’t anticipated. I was visibly irritated with the PM and this was pretty clear to everyone in the room, managers and stakeholders included.

I was fuming after the meeting. That really was the last straw. My poor wife bore the brunt of my rants and expletives that evening (sorry dear).

To make matters worse, the next morning, my senior manager sent me a message. Clearly, he said, I wasn’t “lined up” with my project manager. His suggested remedy was for me to re-locate myself out of the stakeholders’ business unit and to go and sit next to my PM, effective immediately. You can imagine my reaction. A double-whammy! Moving away from the business, thus reducing the quality of the collaboration with them, and having to go and sit next to my jerk of a PM. But my senior manager wouldn’t relent. No arguments, just get moved.

Orders are orders, and off I went, cursing all the way. This was quite possibly the worst decision my senior manager (who, by the way, I highly respected) had made.

Time passed with me in my new location. The relationship with the stakeholders wasn’t strained too much. Because I’d already spent quite a few weeks sitting in their area, the relationships were strong enough to endure the separation. I still spent plenty of time with them, just not all the time.

The most unexpected result, though, was how my relationship with the PM changed. Sitting next to him, we started to develop a rapport – the sort of rapport you only really get when you can have casual conversations with people whilst working on other things, rather than the sort of focussed discussions you get in meetings. Also, I started to experience all the other crap he was having to deal with, and realised that part of his behaviour was driven by external factors that I hadn’t been aware of.

It’s difficult to put my finger on exactly what happened, but in summary, we ended up getting on a whole lot better, after just a few days of sitting together. Because he had better visibility of the work I was doing, he didn’t feel the need to throw random curveballs at me in meetings. He did make a few “helpful” suggestions here and there, but I was able to deal with them calmly and objectively because our relationship was better.

After a week or so I had learned three valuable lessons:

And, interestingly, the Agile Manifesto comes up trumps again – it’s all about valuing the importance of individuals and interaction.

7 thoughts on “How I Dealt with a Difficult Project Manager”